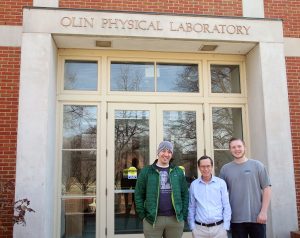 , his students and collaborators apply quantum field theory to the study of black holes and cosmology. The presence of a strong gravitational field results in some interesting and unusual phenomena. These include the acquisition of a nonzero energy by the vacuum and the creation of particles. In the case of black holes, such effects can both distort the spacetime geometry near a black hole and cause it to slowly lose its mass.  The details of the black hole evaporation process and the energy density and pressure of a quantum field near an evaporating black hole are currently under investigation. The dynamical evolution of the early universe may have been strongly affected by the existence of nonzero vacuum energy and particle production.  A semiclassical approximation to quantum gravity is often used to compute such effects.   Anderson is currently interested in the validity of this approximation for models in which the universe undergoes a collapsing phase before its current expansion phase.  He is also interested in the validity of the semiclassical approximation when a strong electric field in a vacuum decays via the production of charged particles.

research covers a variety of topics including both particle phenomenology and astrophysics. For the next decade or so, astrophysics will dominate discoveries in particle physics, since there are very few opportunities at high energy colliders for new discoveries. Two of his recent papers have focused on the conversion of pseudoscalars into photons in the presence of large scale or strong magnetic fields. Such conversions may provide the best limits on pseudoscalar couplings. Up to now, he has focused on methods that rely on the galactic magnetic field, and consequently are sensitive only to massless pseudoscalars. He hopes to use some of the same ideas in the context of stellar magnetic fields, allowing the probing of much larger masses. He hopes to improve limits on the axion by this technique.  One area he has focused on recently is the possibility of a naturally small cosmological constant. A positive cosmological constant could help resolve the apparent discrepancy between the large estimated ages of stars in globular clusters and the rather large value of the Hubble constant coming from most recent experiments. It is difficult to see how such a small cosmological constant could arise. In a paper with W.D. Garretson, he explored the possibility that the universe might have a zero cosmological constant in the true vacuum, but that we might lie in a false vacuum. The smallness of the splitting between the two vacua could arise due to the appearance of an accidental discrete symmetry connecting the two vacua. The splitting would be the result of Planck-scale suppressed nonrenormalizable terms which would violate the discrete symmetry. Carlson hopes to explore models which demonstrate these ideas in a more natural way in the near future.  Neutrino physics is another area that interests Carlson. He has written several papers involving various neutrino mass generation mechanisms, and he is returning to this subject once more. Neutrino masses naturally arise in many extensions of the standard model, and could have important cosmological consequences. With new results from various solar neutrino and terrestrial neutrino experiments, and the appearance of new detectors in the near future, this will be a rapidly growing field. Carlson believes astroparticle physics to be one of the most promising areas in particle phenomenology in the next decade or two.

research interests are in the areas of computational astrophysics and gravitational physics. Currently, his research is centered on studying the coalescence of compact binary systems. Compact binaries are systems containing a pair of black holes or neutron stars that orbit each other. Eventually, the objects in these systems must collide since they are constantly loosing energy in the form of gravitational waves. These gravitational waves that are produced as these compact objects spiral closer together, as well as those that are produced when they collide and settle down, will be observed in the latest generation of laser-interferometer gravity wave detectors that are currently under construction. By observing these collisions, it is expected that we will learn a great deal about the physics of strong gravitational fields, the behavior of ultra-dense matter, the expansion of the universe, and much more. Cook and his collaborators are currently developing the theoretical and computational tools needed to simulate the collision of a pair of black holes. Numerical simulations are the only way to study the last few orbits and the ultimate coalescence of a compact binary system, and so, they are the only way to connect theory with experimental results. Some of the issues that are currently being studied are: the computation of initial conditions for black hole and neutron star binary systems, the formulation of stable evolution schemes, and locating the surfaces of black holes as they evolve. All of these problems are heavily computational and require the use of supercomputers such as the Deac cluster.